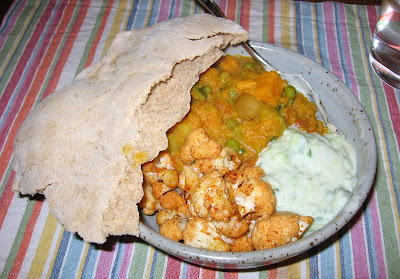 Last night I made a delicious feast of Indian food for dinner.  The keystone was a dish I have made many times, Sweet Potato Badi from Entertaining for a Veggie Planet

.  Since I had the time, I went whole hog and made roasted cauliflower, raita, and flatbread (aka pita) to go along, as well as the usual long grain brown rice.  It was really yummy and well worth the effort - I have lots of leftovers to eat for lunch this week (and some more stashed in the freezer). 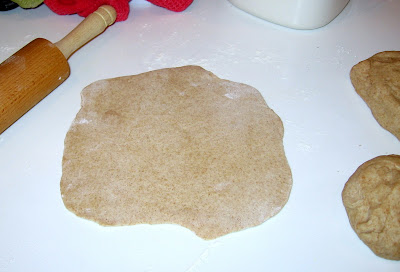 The first thing I got started was the flatbread.  I used the pizza dough recipe from Animal Vegetable Miracle

by Barbara Kingsolver, and then just cooked it as a flatbread.  This is my favorite pizza dough, and it made a great bread all by itself.  Following instructions from the Sunlight Cafe

, after the dough had risen I punched it down and then cut it into pieces.  I actually put half of it in the fridge to experiment with the idea of letting it sit for a day or two and get a little bit of a sourdough taste (I have been wanting to read Artisan Bread in 5 Minutes a Day

but get the basic gist of it from reading articles etc).  The other half I cut into four pieces and smooshed each one out into a disc, then let them rest for five minutes and then rolled them out very thin.  Some of them sat for another five minutes at this stage which I remembered after the fact seems to be what gives pita its pocket - so I basically made pita breads.  I cooked each one for about 8-10 minutes at 400 degrees. 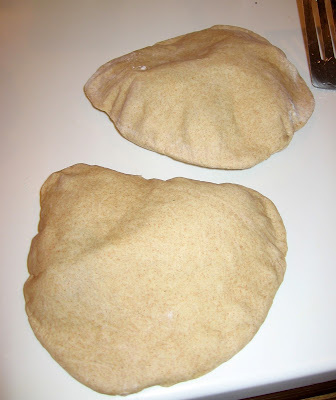 While the Badi was simmering, I chopped up the cauliflower and roasted it in the oven at 350 for about 20 minutes.  I used 2 teaspoons of an Indian spice mix that I had from Penzeys, then drizzled with olive oil and sprinkled with salt.  I stirred it a few times while it was cooking to make sure it cooked evenly. 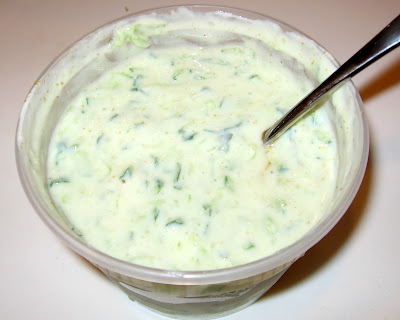 Finally, while the breads were cooking I pulled together a quick raita - mixing 1 cup each of plain yogurt and shredded cucumbers (from my garden) with about 1/2 teaspoon each of cumin and salt. 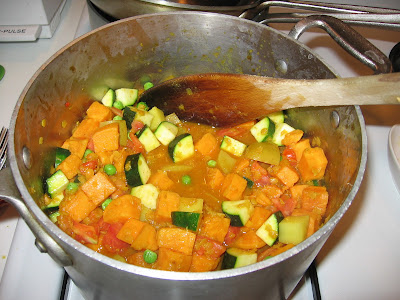 Over time, I have made some tweaks to the Badi recipe, so here is my version.


Sweet Potato Badi
Modified from Entertaining for a Veggie Planet

In a large pan, heat the canola oil over medium heat.  Saute the lentils 5-10 minutes (adding the spices part way through), stirring frequently, until they begin to brown (or before - they burn pretty easily).  Add the potato/sweet potato and 1 1/2 cups water (or enough water to cover them when you put the pieces in a bowl after you chop).  Bring to a boil then reduce to a simmer and cover almost completely; simmer for about 15 minutes.  Add the zucchini, tomatoes, and peas and bring back to a boil and then reduce to a simmer again.  Cook until the vegetables are fork-tender and the liquid is mostly gone, about another 10-15 minutes.  Add more water while they cook if needed.  Remove from heat.

While the sweet potato mixture is cooking, heat a small frying pan over medium heat without any oil.  Toast the coconut until it is light brown (about 5 minutes), stirring frequently with a fork to mix, or shaking the pan.  Remove from heat before it is entirely done, as it will continue to cook in the pan (or transfer it to a bowl at that point).  Combine the the coconut, yogurt, chiles and salt in a bowl and mix together thoroughly.  Fold the yogurt mixture into the sweet potato mixture, then cover and let sit for a few minutes.  Serve over rice.
Posted by Kate S. at 5:00 PM