Aloha from Hawaii! Amazingly we survived the rest of our packing and have really been enjoying our relaxing vacation here while our stuff gets moved across the country. We have wifi access today so I thought I would pop in with a few odds and ends. First, a reminder, Lindsay Sews is hosting the bloggers' dinner party this month and there are a few more days to join in. Thanks again for helping out Lindsay!

Also I realized that I would need help next month too, and Michelle from City House Studio has agreed to host - so be sure to stop by her blog next month and check it out. Thanks so much Michelle! Do you read Kristie's blog, obsessive crafting disorder? If you don't already, you should definitely check it out, she is hosting a fun bag lady week again next week including tutorials and giveaways, including a chance to win copies of my two patterns. Go check it out!

Oh, and you know how before I got swallowed alive by packing I mentioned that I was planning to host a drunkards path quilt-along this fall? I am super exited that Kristie and I will be hosting it together, stay tuned for the official announcement and more info next month!
Posted by Kate S. at 12:34 PM 3 comments:

Adventures in Maine and birthday socks in progress

I am savoring the relaxed feeling after our week off in Maine as we sit in the airport and wait for our flight home, where several more days of frantic packing and moving await us. Some highlights from the rest of our trip: After visiting friends, we headed up to Acadia national park and camped for three days. It rained the first night and the next day, but we were undeterred and went for a nice hike by the coast and up a small mountain... We figured we should get used to hiking in the rain since we are moving to Oregon! We were rewarded on our hike when we found a delicious patch of wild blueberries, yum! We also went for a nice bike ride on the carriage roads - definitely something I recommend checking out if you are in Acadia. Our last day the weather was totally sunny and gorgeous and we enjoyed the coast some more (and we were extra excited that the weather worked out that way since we were able to dry our tent out entirely before packing it back up). There are also lots of fun shops in midcoast Maine and I indulged in some vacation craft shopping, including these lovely fabrics from alewives fabrics in damariscotta mills... And these luscious sock yarns (both sport weight, too, so I can knit quick socks for myself, too!) from heavenly socks yarns in Belfast Maine. I definitely recommend a visit to both shops if you are in either area!

Wish me luck with the next three days of packing/moving, and then we are off to Hawaii! I can't wait! I love how this dress turned out - and it's the first piece of clothing I have sewn for myself that isn't a knit in probably 15 years, so that makes me extra excited about it!  I found all the tips and ideas from the sew-along super helpful, too, so I will definitely be keeping an eye out for more sew-alongs to follow either at the time or after the fact.  I can't wait to wear this dress to the wedding next weekend!
Posted by Kate S. at 10:48 AM 7 comments:

I have been meaning for a while to create a shop for my patterns that offers automatic downloads after purchase, so that anyone buying a pattern can know they will get it right away, and I don't have to worry about being away from my email.  Our upcoming move was just the push I needed to make it happen - hop on over to my new Meylah storefront and check it out!

I'm putting my Etsy shop in vacation mode until mid-September after we are finished moving, but the patterns in the new shop will be on sale for only $5 until then, compared to the regular $6, so if you have been considering getting one, now would be a great time!

The patterns for sale are: 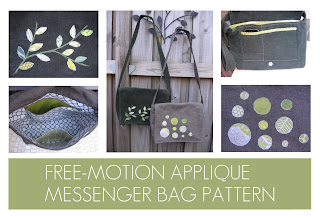 In between frantically packing for our move, I fit in a bit of sewing time yesterday to finish up a few projects and make my July bee block.  For the Love circle for the do.good stitches bee, this month Rachel asked us to make a single large block rather than two regular-sized ones, inspired by the polka dot block in the new Block Party book.  The color scheme was meant to evoke and ocean, with shades of saturated blue, green and then greys as well - it was actually pretty similar to a lot of the fabrics I used in my Kaleidoscope quilt top so I had kept those fabrics out and used a number of the same ones.  Like Rachel, I made mine using fusible web to secure the circles to the background fabric, and then zig-zagging around the edges of each to secure them.  While I really like the overlapping circles that many folks in our bee have done with this block, when I was laying out mine I was just more drawn to a design where they were all separate.

Since I am going to be largely MIA this month, Elizabeth from Don't Call Me Betsy was kind enough to agree to sub for me and make my bee blocks this month!  Thanks so much Elizabeth :)

I have a few more finished projects to show you - hopefully I can take another break from packing soon and find time to write a post or two.
Posted by Kate S. at 8:59 AM 1 comment: