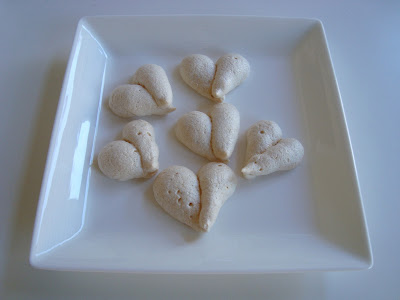 I haven't blogged in a few days but it is mostly because I have been SO BUSY making stuff!  I spent most of the weekend sewing up baby blankets and tote bags for the craft hope charity project I am doing (originally mentioned here) and will be back to share more with you on that soon (lets just say I may have been a bit overambitious when I decided to make 12 kits...). 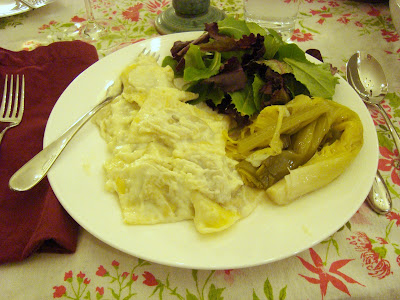 Then I whipped up a really special Valentines day dinner for my sweetie, if I do say so myself (apologies for the crummy photo quality above - this was the best I got).  I adapted the delicious butternut squash and walnut lasagna that I made before into a filling for handmade ravioli and then made the bechamel sauce to go on top.  To adapt the lasagna to make the filling, I basically prepared the squash as described in the recipe, then ground the nuts in the food processor, and then added the squash/onion/garlic/herb mixture, the cheese, and an egg and processed a bit (leaving it somewhat chunky not totally pureed).  I also made braised leeks again for the side, which were yummy and a good complement to this dish - I plan to share that recipe some time too. 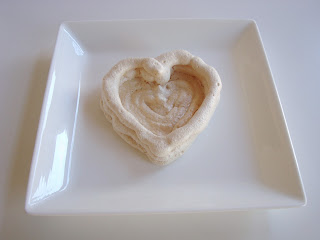 For dessert, I made homemade strawberry ice cream and heart shaped meringue nests like the one shown above, as well as a bunch of heart shaped meringue bites.  Somehow making meringues seemed like a totally normal thing to do since my mom always used to make them, but then I realized I had never made them myself and it seemed like it might not be so easy.  So I poked around in a number of my cookbooks and then forged ahead.  I found some recipes that called for more complicated ingredients but ended up going with an ultra-simple approach and it worked well.  I overbaked them a bit which mostly meant that they were still delicious and even more crumbly and delicate, but slightly brownish in color.  I was OK with that although it does make me want to make them again to see if I can hit it spot on.

Sorry I don't have a picture of the ice cream, it was pretty good but not phenomenal, being made with frozen strawberries rather than fresh, in season ones.  This too I will have to try again [insert noises from husband in background pretending to be disappointed that there will be more of this in his future].  Also no pottery notes - we decided to eat off our nice china since it was a special occasion!  You can see the cute pink and red flowered tablecloth that I recently thrifted in the pic above which served perfectly.

Meringues
Preheat oven to 250F and line baking sheets with either silicon baking mats or parchment paper (I used my fave silicon mats and they worked great).

Apparently if any oil gets into your meringues it really messes things up, so for starters make sure that your mixing bowl and mixer are extremely clean, and make sure you don't get any yolk in your egg whites.  I used a stand mixer but I am sure you could do this with a hand mixer and a bit more elbow grease.  With your mixer on the highest speed and using the whipping attachment, beat the egg whites until they form soft peaks.  With the mixer still running at high speed, gradually add in the sugar.  Stop and scrape down the sides if needed, then continue whipping at high speed until the mixture glistens a bit.  I read that in a recipe and didn't think I would be able to tell when to stop but it really does get a bit shiny.

To form meringues, you can just scoop the raw meringue onto the baking sheets by the spoonful, but you can get more elegant shapes if you pipe them.  I used a regular pastry bag and the largest tip that I had, I think a size 11 or 12, it was about 1/4" across.  You can also use one of the tips that looks like a star at the end, I just used a plain tip so that I could make the cute hearts in the first picture.  To get a thicker shape just hold your tip in one place while you squeeze out the meringue.  To make a nest, pipe a concentric shape (usually a circle, but I did a heart), and then pipe up a few layers at the outer edge to build a kind of wall.  You can play around and see what shapes you like.

Bake for 1.5-2 hours (I baked for 2 hours or maybe a bit longer) - you can check but pulling one out and eating it to see if they are done.  When they are done remove from oven and then remove from the sheet.  Warning, these are addictive!
Posted by Kate S. at 8:55 PM