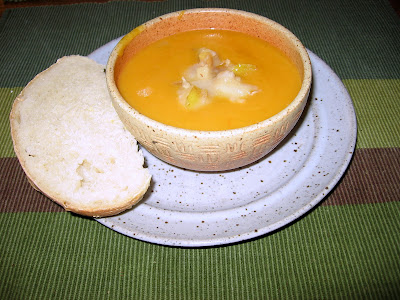 I was looking through my recipe box the other day and came upon a handwritten recipe from my mother for this soup.  It doesn't say where the recipe was from originally, but it sounded delicious and like just the thing for the start of fall.  I picked up fresh cider, pears and butternut squash at the farmers market and I was all set to try it out.  I have to say that this recipe had a lot of butter in it... my mom's notes indicated she had cut the butter in half, and I cut it in half again, and it still seemed like a lot to me.  I am sure the soup would be delicious with even more butter but it seems excessive to me - I think it would taste good using half butter and half vegetable oil and/or cutting down the amount of butter even further than I did.  In any case, it was a really great flavor combination and we enjoyed it a lot. 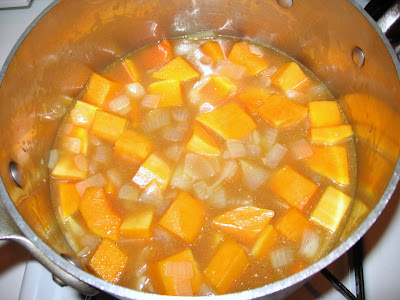 Butternut Squash Soup with Pear Ginger Compote
For the soup:
In a medium saucepa, melt butter and add onion, cook over medium heat until transparent.  Add squash and cook for 2-3 minutes, then add cider and bring to a simmer.  Lower heat and cover, and cook until squash is tender (about 1/2 hour or more).  Puree either with a hand blender or in a regular blender (being careful not to burn yourself).  Season with salt and pepper.

For the compote:
In a medium skillet, melt butter and cook pears gently over low heat for 5 minutes.  Add ginger and continue cooking with lid on until tender (10-15 minutes).  Serve soup topped with a dollop of compote. 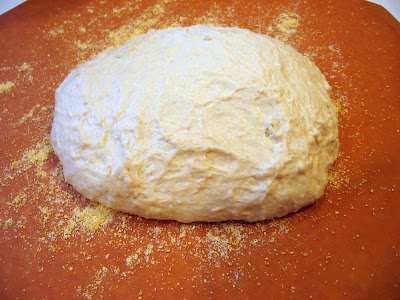 The other part of this meal was fresh homemade bread.  A few months ago I bought the Artisan Bread in Five Minutes a Day

cookbook, which I had been hearing all about and wanted to check out.  It has a lot of really great-looking recipes and I was excited to try their technique.  The basic idea is that you make a large batch of very wet bread dough and store it in your fridge for up to a couple weeks, and then you are able to take out a loaf's worth and cook it after a relatively short rise.  The wet dough keeps the bread moist and as the dough ages in the fridge it takes on a sourdough type of flavor.  I was tempted to jump right to one of the whole grain loaves, but they advise starting with the "master recipe" for a white bread boule, so I started there.
Despite making a number of mistakes (like not putting enough flour on the dough when I was shaping it, and forgetting to slash the top before baking), the bread turned out to be really delicious!  The master recipe was published in the NYT a few years ago if you are interested in trying out the technique without buying the book yet...  Now I just have to decide what to do with the remainder of the dough I have saved... I am thinking probably pizza, but I am tempted to try another loaf of bread. 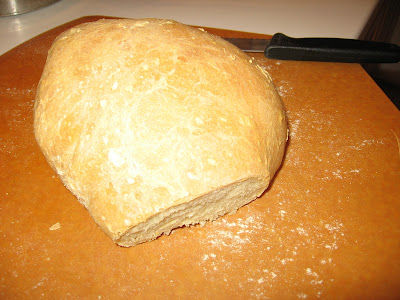