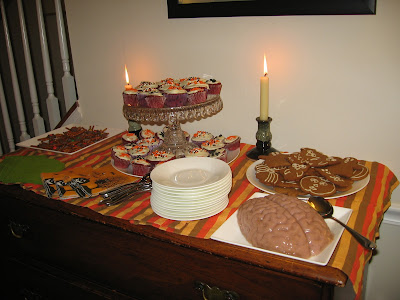 We had a small halloween gathering, and in addition to the spider treats, I made a few other desserts.  I may in fact have gone a bit overboard.  Here is a quick rundown of what I made. 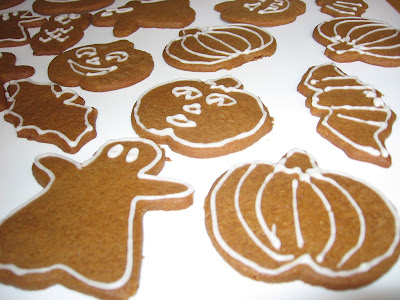 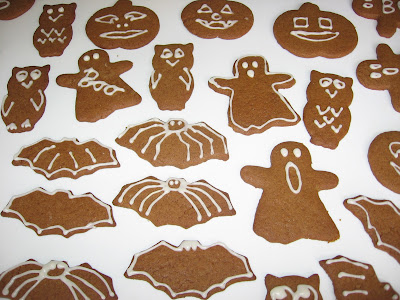 Iced gingerbread cookies... I love making iced cookies.  Iced sugar cookies are a big Christmas tradition in our family, and we have made them more and more elaborate over the years.  I have expanded into making gingerbread cookies with simple piped icing (see blog header for an example from last christmas) and thought they would be very fun for halloween.  I was especially proud when I realized that I could also make spider cookies with the bat cookie cutter (I got bored of making bats).  I don't have the recipe with me to post but may post it later... 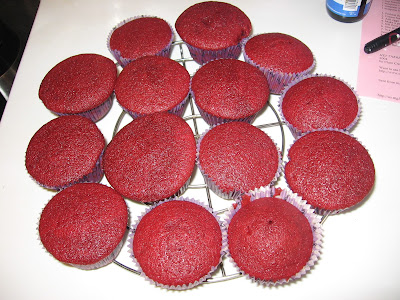 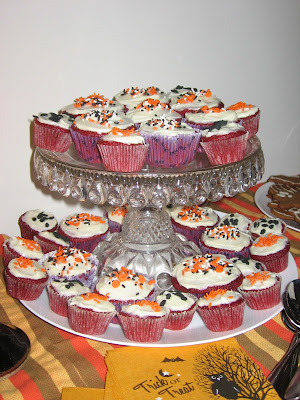 Red velvet cupcakes.  These are Lawson's favorite kind of cake/cupcake and I thought the red color was appropriately spooky/bloodlike.  I used this recipe for the cupcakes, and a half batch of cream cheese icing from this recipe.  I still had a lot of icing left over and Lawson was very excited to hear that this may mean a carrot cake or carrot cupcakes in our future.  I had never made red velvet anything before and thought they turned out very well!  They do use really a ton of red food coloring.  You can see in the photo that I put the family heirloom cake stand my aunt Linda gave me as a gift to good use. 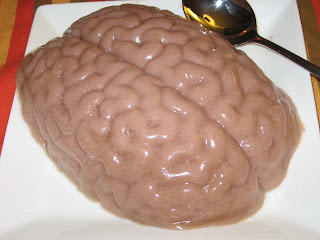 Finally, the coup de grace, I made a disturbingly realistic brain jello.  I more or less used this recipe but started with green jello and added red food coloring.  Also instead of using 2 packets of jello I used 1 packet of jello and then added plain gelatin.  The evaporated milk really does give it an opaque brainy look.  I tried some and it wasn't that delicious but definitely made up for what it lacked in taste with gross realistic-ness.  Thanks to Davis and Lauren for lending us the brain mold!
Posted by Kate S. at 7:59 PM