I haven't had much time to post but I still have had quite a lot going on on the craft front.  In knitting news, I finished these socks... 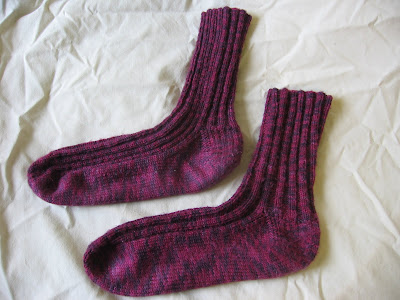 and then I quickly made a pair of fetching mitts (to match this hat which I had previously made) - they have been great for fall weather. 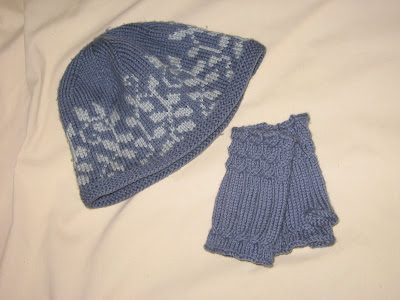 And I have started the L'illo sweater for my nephew (who is 2 1/2 months old) - making it in the 12 month size since he is already wearing 6 month size clothes and I want them to get some good use out of it.  I didn't take a pic yet but will at some point.

Finally, my sad knitting news is that halfway through the second sock, I left the dragonfly socks I was making on the metro :(.  I put in a missing items report and was hoping they would turn up, but it was several months ago and no word, so I am out of luck.  They were my first lace socks, too... I already have the yarn picked out for another lace pair, though.  Oh well.

In sewing news, I made a few pairs of booties for my nephew, in larger sizes since he has mostly outgrown the original ones I made him.  I made them using the same pattern that I used before, but I enlarged it 5% and 10% to make larger booties.  I initially enlarged it more but it turned out to be too much... hopefully these sizes will work well and fit him for a while (the larger ones will probably not fit him for a few months). 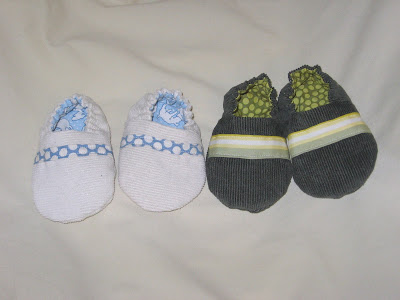 I also made some monkey booties to match the monkey bibs I had made earlier, for a gift for friends who are expecting.  I am sad that the scraps from this monkey fabric I got for a baby quilt about 3 years ago are almost all used up... they have been so fun to use!  I have decided this means that I should get other fun kid/baby fabrics that I can have just to play around with.  Anyone have any suggestions? 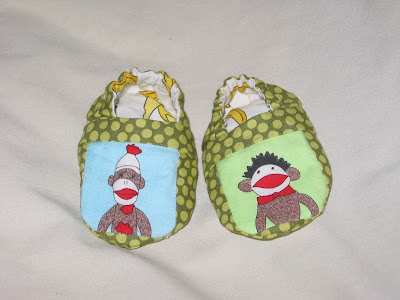 Finally, my most exciting news is that I got a NEW SEWING MACHINE!  Wahoo!!  I will probably post more about it later, but the short story is that my old sewing machine was given/loaned to me by an old family friend, and it is a 1950's singer featherweight... which is lovely and solid as a rock, but can also be frustrating because it often has issues with tension, and only goes forward and backwards... no zigzag, no buttonholes, no nothing.  I had been thinking I would save up and get a Bernina, but then I saw this Brother machine reviewed on Amazon and it sounded too good to be true... I figured, at this price even if it doesn't last forever, it's worth a shot.

Amazingly it even came with a walking foot and a free-motion quilting foot, in addition to all the normally-included feet.  I am super excited but also a bit overwhelmed... I am used to working out projects within a very constrained universe of sewing options (as I said, forwards and backwards), so all these stitches and feet are giving me so many ideas that I'm not sure where to start.  So far, all I've done is read the instruction manual, but tomorrow I am planning to get set up and give her a try!  Wish me luck!
Posted by Kate S. at 8:02 PM