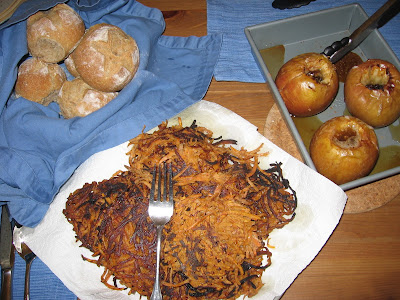 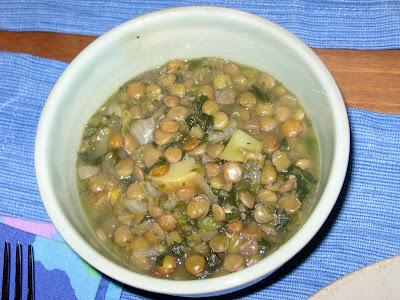 Growing up, my family celebrated both Christmas and Hanukah, but I don't always celebrate Hanukah now, so I was excited to cook up a celebratory Hanukah meal when I had a good friend over for dinner last night.  We actually didn't light a menorah (we were going to jerry-rig one using birthday candles but I didn't have enough)... but the dinner still felt like Hanukah in any case.  I wanted to think of a menu that had some traditional elements but that took healthy, vegetarian and interesting approach.  I love sweet potatoes, so I thought it would be fun to try sweet potato latkes, and rather than making apple sauce I decided to make baked apples.  I also made rolls using 1/2 whole wheat, 1/2 white flour and the artisan bread in 15 minutes a day

cookbook, and I made a lentil stew with potatoes and spinach.  I was very happy with how it turned out!  The baked apples were especially delicious, I want to make them again soon.
For the latkes, I used this recipe, although I had a lot of sweet potatoes so I added another egg.  I liked the spices but I think they might have actually been better without them.  Also, mine had slightly cooled before I ate them, which really isn't ideal.  They are definitely best when eaten piping hot!  I served them with sour cream. 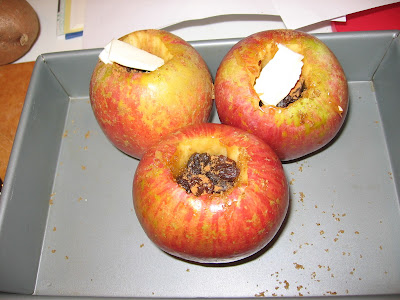 For the baked apples, I modified this recipe (inspired by this recipe from Epicurious, but not having the necessary ingredients/time to do something that complicated).  Basically, in each apple I put a tablespoon or so of brown sugar, as many raisins as would fit, a sprinkle of cinnamon and then topped with a small pat of butter (definitely not as much as the recipe called for).  I baked them at 350 for about 45 minutes or maybe more (until they were tender).  They were tender but not disintegrating and the addition of cinnamon and raisins definitely made it a more interesting taste.
Happy Holidays!  I hope you are having good celebratory meals with friends and family!
Posted by Kate S. at 2:37 PM