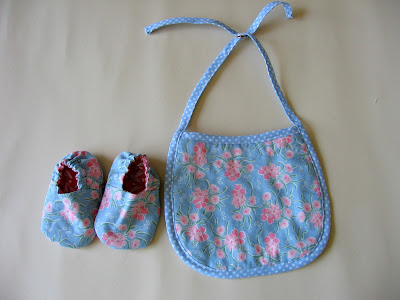 I was super excited to find out today that I won the giveaway on the long thread for the book fa la la la felt!  This is the first blog giveaway I have won, so that was exciting, but mostly I am psyched because I love making holiday crafts, and this looks like it will have lots of great ideas.  I thought that now would be a great time for this post which I have been meaning to write, and which was partially inspired by a post on the long thread.  I thought the baby shoes were adorable and although the idea of making shoes had never occurred to me, it turned out they weren't as hard to make as you might think.

Inspired by a different post on purl bee I have also whipped up quite a number of baby bibs.  The bib and booties together make quite a cute matching set!  Here is the back of the bib shown above (and the fabric which I used on the inside of the shoes): 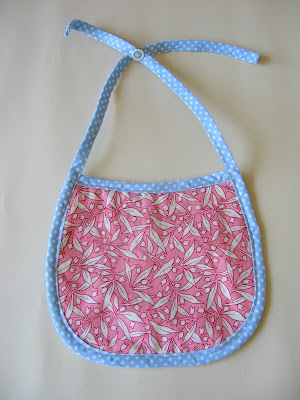 As you can probably tell, I made a number of changes to the bib pattern.  I drew my own shape (mostly because I didn't feel like bothering to print the pattern, but I think I like the shape that I came up with better), and I didn't include a pocket.  I also decided that the bibs would be more parent-friendly if I made them with snaps rather than just ties, so some that were already made I added snaps in the middle of the back, and then on the next round of bibs that I made I put a snap to one side and adjusted the strap lengths.  The bibs and the shoes are both a great way to use up leftover fabric - I have been enjoying continuing to use the fabric leftover from Eli's quilt. 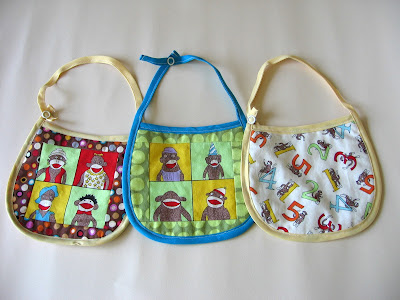 These are the backs of the same bibs: 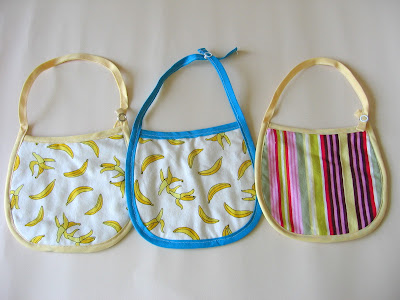