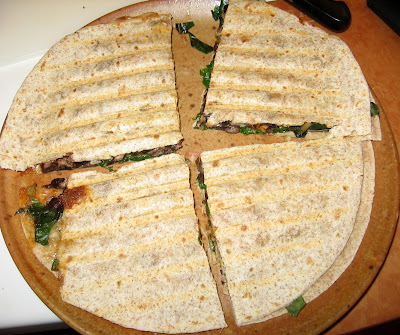 This is literally what I ate for most of graduate school.  Quick, delicious, relatively healthy, and it has black beans... what more could I ask for?  I usually make this with swiss chard, since I grow it in my garden, but it works fine with spinach too. 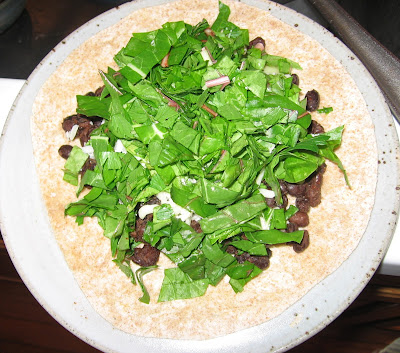 Black Bean and Chard Quesadillas
Makes 1 full size quesadilla (sandwiching two full tortillas) or 2 folded over quesadillas.
Mix together the beans with the chili powder and cumin, then spread on the center of the bottom tortilla (or on one half of each of two tortillas, if you are making folded ones).  Mound the cheese in the center of the beans (or near the fold, if you are making folded ones) - the cheese will melt out as it cooks, so you want to put it near the center to start to keep it from getting too messy.  Put the chard and cilantro on top, then top with the second tortilla (or fold over).  I have always cooked these on a george forman grill or a panini press (folded over size works better on a forman, if you put the fold at the bottom it prevents everthing from coming out the bottom as it melts).  If you don't have either of those, you could try cooking them on a cast iron skillet, baking in a toaster oven (or conventional oven), or even microwaving (although I expect that would get soggy).  Serve with salsa, sour cream, or just plain.
Posted by Kate S. at 3:12 PM