What to do with 8 million cucumbers... and also a bulgur lentil salad 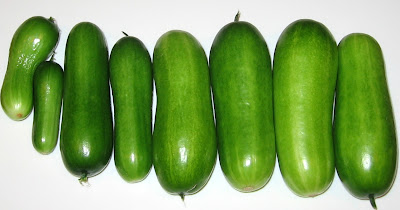 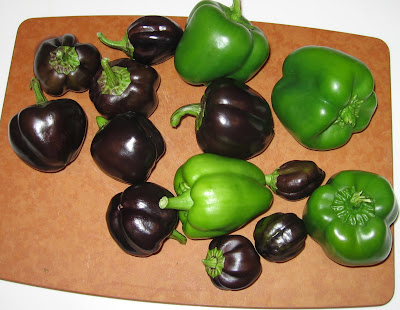 We are back home, and this is what my garden had to say to me after a week away.  I was lucky that it rained a lot while we were gone, otherwise the plants would have been much less happy.  The tomatoes are still recovering from their earlier overabundance but it looks like we'll have a few in the coming weeks which will be nice.  The first answer to what to do with 8 million cucumbers is obvious... pickles!  However, I already made these from this recipe just before we left (with all the cucumbers that I harvested before we left) and they were ready to eat when we got back.  I am normally not a pickle person but I liked them. 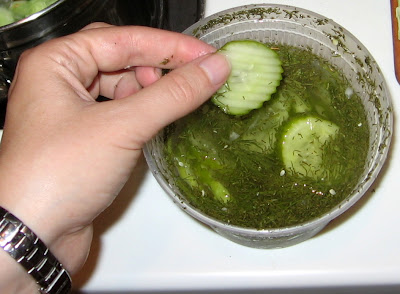 So, I didn't want to make more pickles tonight.  I looked in Chez Panisse Vegetables and came up with a simple recipe for sauteed cucumbers.  I wasn't sure how it was going to turn out, but with nothing better to do with all my cukes I thought I would give it a try.  I also made up a lentil bulgur salad with roasted purple peppers (addressing my other vegetable problem)... The cucumbers were pretty good although a little bland.  The lentil salad was a variant on ones I have made before and was again very yummy! 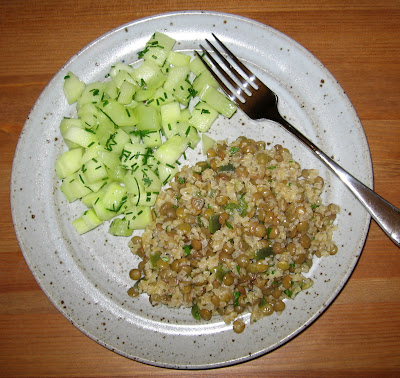 Peel, seed and chop several cucumbers.  Saute in butter until slightly tender but still firm.  Salt to taste and garnish with chopped chives. 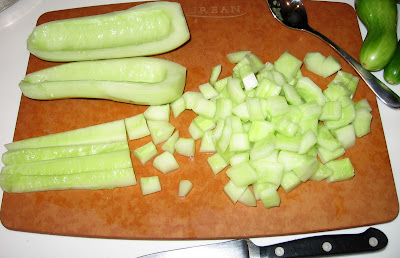 Lentil Bulgur Salad with Roasted Peppers
Bring about 2-3 cups of water to boil in a small saucepan, add lentils and lightly boil/simmer over medium heat until tender (about 20-30 minutes).  Put the bulgur in a heat-proof container with a lid and cover with boiling water by about an inch, let sit.  Very lightly coat the peppers with oil (I used olive oil spray) and roast - I roasted by broiling in the toaster oven until they looked done, turning midway - I think it was about 5-10 minutes.  Take them out of the oven and either put in a paper bag or cover the pan with a plate or other lid, let cool and then remove skins (as much as you can - don't worry if you can't get them all off), then finely chop.  In a large bowl or container, mix together all ingredients.  This would also be good with the addition of toasted walnuts or feta cheese. 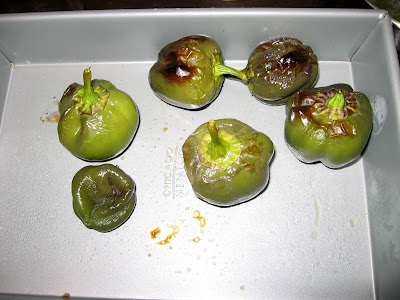