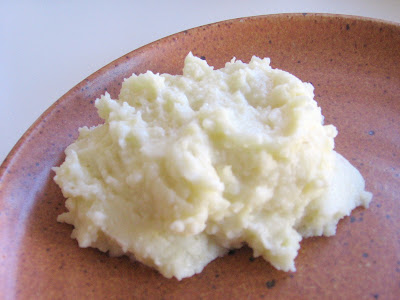 I jumped the gun a bit with my St. Patty's day post yesterday, so I thought I would put up a potato-related post for some more Irish cheer!

I bought a bunch of random vegetables at Whole Foods recently on a whim, which was great because then we had to find ways to eat them all up!  We had yummy steamed artichokes several nights in a row, braised leeks which are always a favorite... and then I kept forgetting about the celeraic (celery root) that I had bought and then rediscovering it in the fridge.  I thought about making a gratin and would love to do that another time, but decided to do something more basic and made a potato celeraic puree.  It looks like regular mashed potatoes but the celeraic gives it a lighter, more delicate taste.  I didn't take any pictures of the prep, which is really too bad since celeraic is so funny looking.

Peel the potatoes and chop into approximately 1" or slightly larger cubes.  Put in a large pot and cover with plenty of water, add a dash of salt.  Bring water to a boil then reduce heat slightly and cook about 20 minutes until very tender, then drain.

Warm up the milk in a saucepan or the microwave (if microwaving, use 30 second or 1 minute increments and stir in between).  Puree the potatoes, celeraic and milk in food processor (the recipe suggests using a food mill or ricer, so you can also do that if you have one).  Add a splash of white vinegar and salt and pepper to taste and blend it all together.
Posted by Kate S. at 8:20 PM