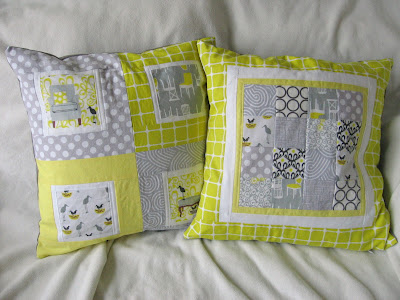 After making my first nesting chairs pillow with this fun Laurie Wisbrun fabric, I couldn't wait to make a few more.  I wanted the pillows to all go well together but not to have the same design, (and I wanted a chance to try out other ideas), so I made each with a different variation of square blocks.  Like the original pillow, both of these pillows feature some other grey and yellow fabrics thrown in, and also include a solid white square border in the design. 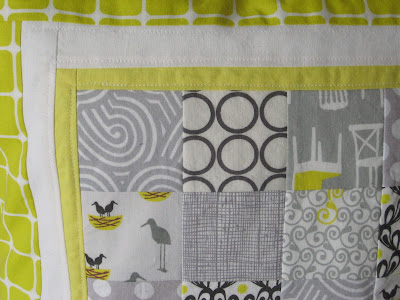 I am really happy with how this pillow turned out.  I thought it would be fun to have a mosaic of pieced squares and ended up selecting predominantly grey ones, so to balance it out I included a thin yellow outline border and then decided to use the yellow sanctuary fabric as the wider outer border too.  I used Elizabeth Hartman's tutorial for quick-piecing squares using lightweight interfacing and it made it super easy.  I figured the extra stiffness wouldn't matter much in a pillow.  Looking back at the directions now, I realize I didn't quite follow the tutorial because I didn't cut and press open each seam, which actually probably would have made this turn out better, but I am very happy with how it turned out regardless. 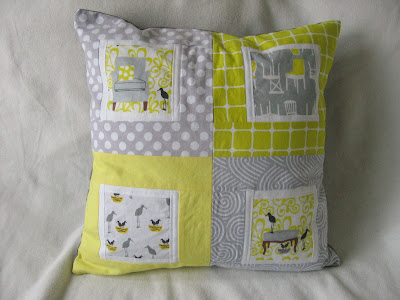 I wanted to mix it up a bit with the third pillow and not have a design with a large centered square but rather four squares.  I had fun fussy-cutting the chair and ottoman motifs from the nesting chairs fabric and like the balance of colors in this pillow too.  I tried to make the inner borders a bit narrower than the outer borders so the squares wouldn't seem to be drifting off the edge of the pillows, but I wish I had moved them even a bit closer together.  This is probably my least favorite of the three but I still like it quite a bit and am very happy with how they look together as a set. 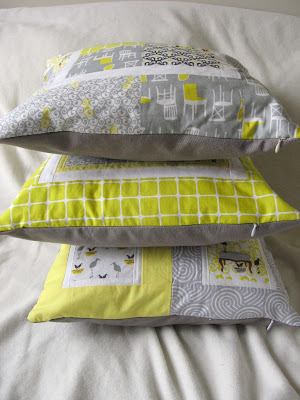 I didn't get a good shot of all three together other than this one of the sides [Update: I went back and took a better photo of all three together - below].  As far as construction, I made these two the same as the first - with no batting, just a muslin lining, and only minimal "quilting" on the white borders.  I used the same grey fabric as backing for all three and did invisible zippers in all of them as well.  I have a good amount more fabric so I may make more of these in the future - including possibly one plain one with the main large print - but this is probably it for the near future (not least of all because I am out of this size pillow form!). 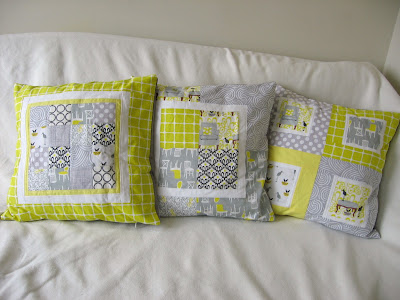